A modification chip or modchip is a device used to play import discs, backup dvd-r/ dvd-rw, or homebrew game roms and/or circumvent the digital rights management of many game consoles, including the Xbox, PlayStation and Nintendo Wii. Almost all modern console gaming systems have hardware-based schemes which ensure that only officially sanctioned games (whose producers pay licensing fees) may be used with the system and implement country and regional lockout similar to the scheme used in DVD movies. The specific technical nature of these DRM systems varies by system, and may include cryptographic signing (Xbox), intentionally unreadable sectors (PlayStation), custom optical media (Nintendo Wii, Dreamcast), or some combination thereof. Modchips are available also for some DVD players and PSP PlayStation Portable, to defeat region code enforcement and user operation prohibitions.
Latest Review WiiKey Wiinja CycloWiz, Wiikey, Wiibuster, Wiip CycloWii modchip.

Why You need a Wii Mod-Chip:

Modchips typically require some level of technical ability to install. Most commonly, wii modchips must be soldered on to a console's motherboard, although there are no-solder install kits (which instead rely on the precise positioning of electrical contacts within the case) which work with some revisions of hardware. 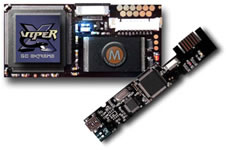 Current Progress: The GameCube part of the Wii has been hacked - you can load unsigned code - DOL files using Action Replay CD + SD Loader. Wii side of the console will a lot harder to hack to do to constant updates from Nintendo.

Contrary to popular belief Nintendo Wii uses standard DVDs with a modified file system for game storage. Nintendo Wii modchip called Viper was released in December of 2006. There is a moded hacked BIOS available for the Viper called Cobra that allows the user to directly boot a back-up or homebrew game on a 3-inch DVD-R inserted in the Nintendo Wii's optical drive . Like most console mod-chips, it attempts to avoid legal complications by including no code which circumvents copy protection or is copyrighted by Nintendo. It has some on-board flash memory which allows the user to write small programs to it (.DOLs). Removing the Nintendo Wii's external case or installing a custom replacement allows the user to boot standard 5-inch DVD-R discs as well, but the positioning of the drive's laser renders only the first 1.4GB of capacity usable. Previously the only common way to run user code on the Nintendo Wii was to use a LAN Adapter combined with a security hole in Phantasy Star Online. More recent (v1.0+) versions of Cobra no longer require an original disc for authentication purposes. TMBinc released an open source IPL replacement for NGC, which allow anyone to produce is own IPL replacement (modchip for NGC). The Cobra software works, after an original disc is authenticated, by resetting the disc drive and unlocking a debug mode which allows code to be sent to the drive and executed. This code stops the disc drive for a few seconds, allowing the user to swap in a non-original disc.  Alternatively, the DuoWii and XenoWii are available. They don't have the features of the Viper, but do allow booting of homebrew programs such as SNES and burnt games.

Mod chips are not entirely necessary if you wish to try a different approach, such as WiiLoader, HD Advance and/or Wii Independence Exploit, because it allows the user to install a hard drive, and copy the contents of original game DVD discs to this hard drive. At this point you no longer require the original DVD or even a modchip to play the games from the hard drive installed into the Wii. By using M.R. Browns Wii Independence Exploit, one can store the HD Loader executable (or any other homebrew code) on the memory card, trigger the exploit and load the copied games without using a burned disc. For more information on what games work with HD Advance, check out the checklist Compatibility lists.